I had the chance to be a finalist in the Singapore Airlines AppChallenge 2018 ; this is a short rundown of this amazing experience.

Singapore Airlines, Singapore’s flag carrier airline, is looking for developers, start-up founders and students to brainstorm over several problem statements and come up with a prototype, as a part of the Singapore Airlines AppChallenge.

The SIA AppChallenge started in 2015 and has only been growing since then.

The jury received 406 submissions this year, during the initial selection phase.

Only 12 teams would make it to the Grand Finale : 6 from the open category, and 6 other composed of Singaporean students.

Five problem statements were proposed to the participants :

“Let it fly” is a simple pun : offloaded passengers have to let their plane fly off, but they should also let it fly as it’s no big deal, thanks to the awesome compensation they get.

The app aims at increasing the numbers of volunteers by providing them a way to swiftly take action, should they be offloaded. For this, it offers several features :

Our initial submission was a React/Redux web application connected to a NodeJS back-end.

Thanks to create-react-app, React is a great choice to quickly build prototypes from the ground up while writing clean code.

Component libraries allowed us to build a pretty UI in seconds, while state management libraries such as Redux helped us dealing with the data coming from the back-end. 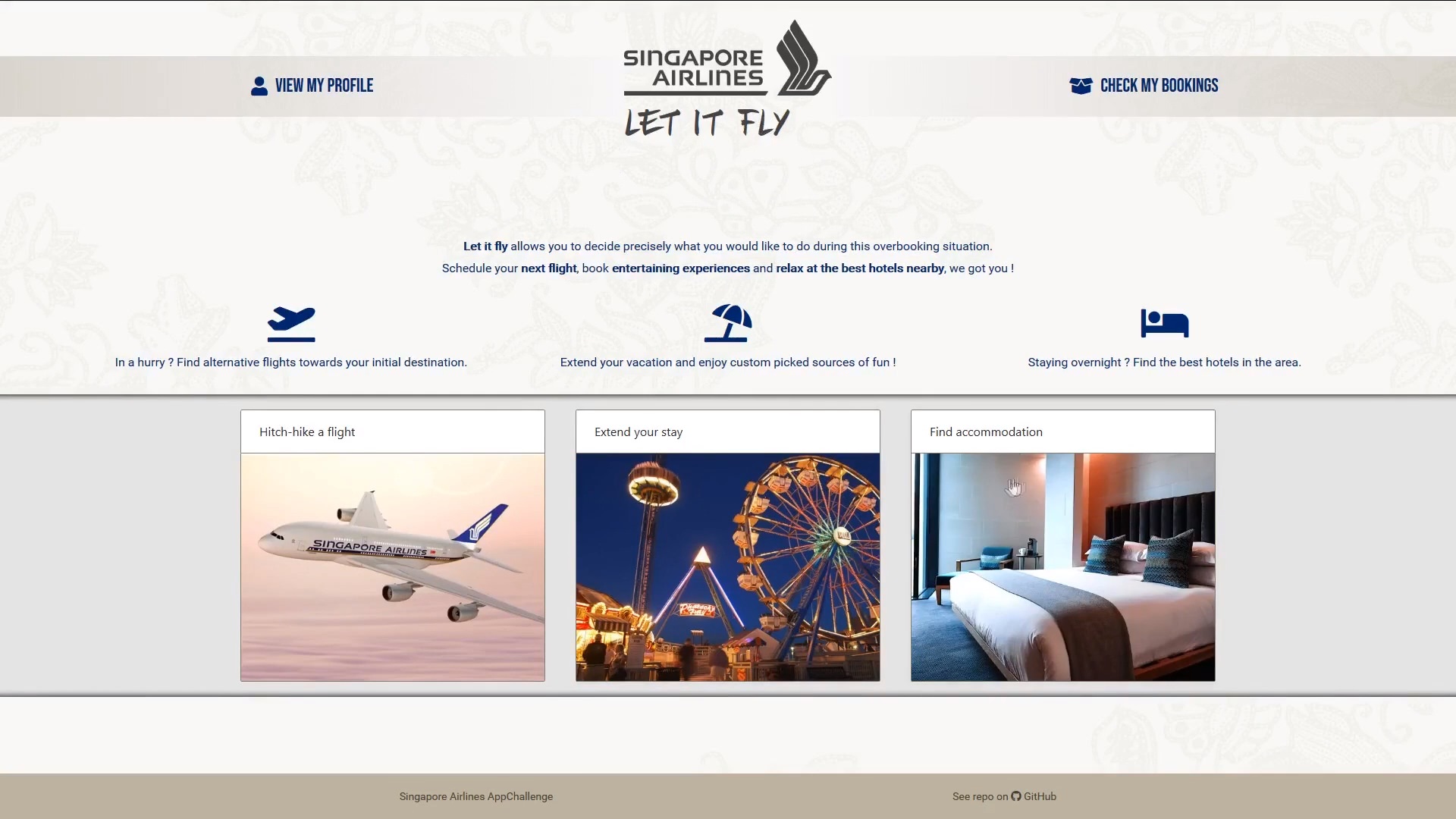 Singapore Airlines did provide a dummy REST API, however there wasn’t much data available. Moreover, we could not get access to essential third-party APIs to populate our app, such as AirBnB’s or Booking.com’s, and had to use additional dummy JSON data.

NodeJS and ExpressJS allows creating a webserver in seconds, although using a boilerplate can make things even easier as it includes several utilities for parsing, dealing with security or querying external APIs.

We created a voiced-over 5 minutes video describing the problem and our solution, as well as demoing the web app.

After being selected for the grand finale, we decided to take “Let it fly” further by integrating it right into the official SIA mobile application, and provide a way for staff members to monitor the overbooking situation.

We only had a few days to submit our final project, thus could not actually connect these applications to the back-end previously created.

We implemented a React Native application using the Expo framework, which makes building and sharing native cross-platform apps a breeze.

Although we did not need the cross-platform feature, using React Native allowed us to reuse some of the components and the logic of the web app from the initial submission.

The native-base library was quite handy to avoid styling each component by hand.

The dashboard was a last minute idea, and we used simple components along with react-chart and dummy data to showcase the overbooking monitoring feature. 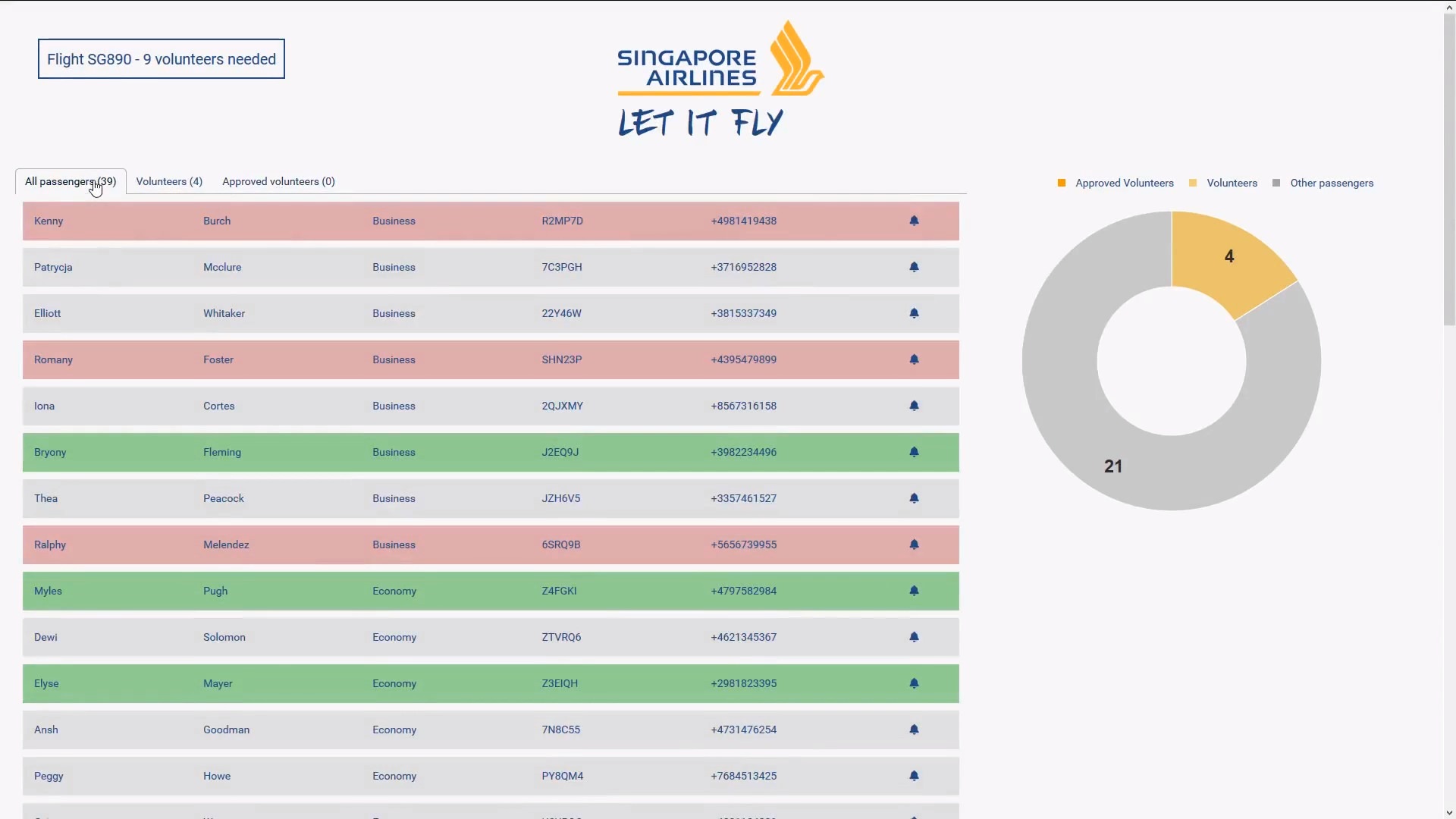 A demo video was created, and was voiced over live during the pitch.

After making it to the final phase, our team was assigned with a mentor with whom we were able to talk about the project on Skype.

Our team was flown out to Singapore on October 25th for the grand finale, and we were to stay there for the entire week-end.

We were able to rehearse with our mentor and an advisor at the National University of Singapore (NUS), and received useful tips for our presentation.

The day before the finale, each team would present their own project in front of a small audience, composed of the challenge organisers, to make sure that everything would run smoothly.

On October 27th, each teams pitched their idea in front of Singapore Airlines execute commitee for 13 minutes :

The results were announced on the same day, shortly after the pitches. Sadly we did not make it on the podium, but were still happy with our presentation.

We felt that the winning ideas were quite interesting and definitely deserved to win. However we felt that some of these ideas had drifted from the grading criterias, which were :

Indeed, one of the core principles that we kept in mind while designing “Let it fly” was feasability. Our solution had a short time to market and could easily reach production in months. Due do this, “Let it fly” may not have been as audacious as some of the winning ideas.

Our project was software-only. Many projects that ended up at the top involved both hardware and software, and some even had a physical prototype ; this may have been a disadvantage.

Oral presence and presentation quality were absolutely key during this event. Some teams had really good speakers, which would make the pitch much more lively. 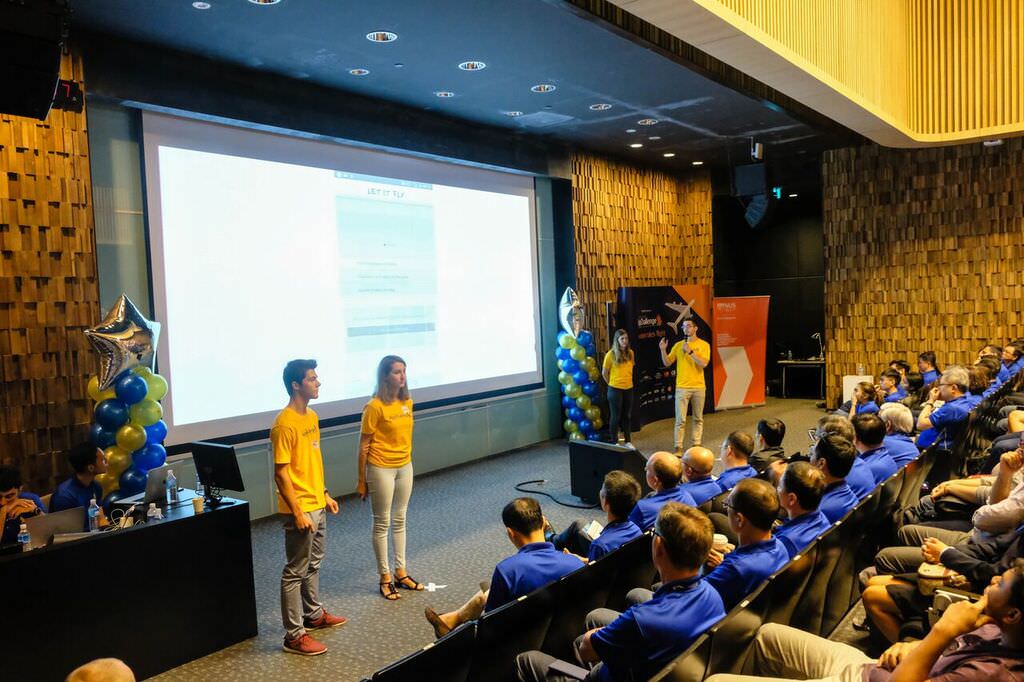 Some teams attempted a live demo, but it usually did not work well due to the unpredictable conditions (spotty Wi-Fi, Murphy’s law…). Pre-recorded demo videos sometimes had to be used instead.

Answering jury questions was no easy task, as these were quite relevant and were really trying to frame each project.

Overall, all teams did a great job at presenting and respected the strict 13 minutes maximum time for the presentation.

We had a blast during this event, that was quite well organized by SIA employees and Agorize. We will definitely be entering the challenge again next year !